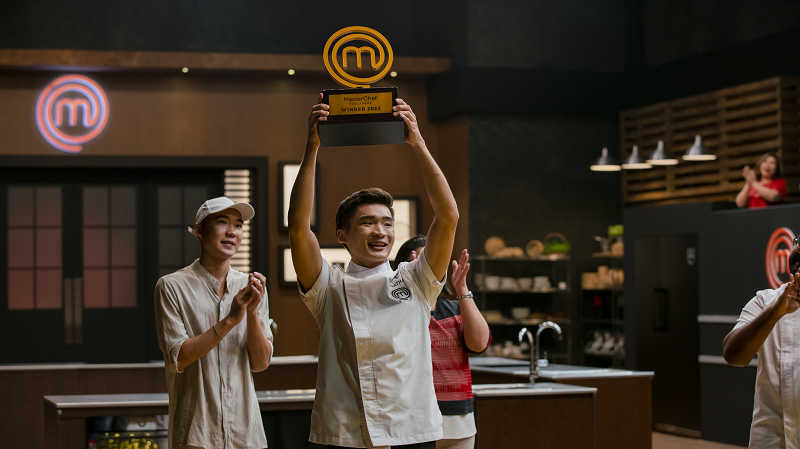 Singapore, 3 July 2022 – After months of mounting challenges and an exhilarating evening of culinary showmanship, dental student Johnathan Chew has excelled in his toughest exam yet by winning MasterChef Singapore Season Three! In a thrilling three-way match against his fellow finalists – visual arts instructor Azwandi “Andi” Robani and car sales advisor S “Nares” Nareskanna – Chew wowed the judges with his sophisticated spin on simple local cuisine to clinch the most coveted cookery title in the Singapore culinary scene.

For the first time in MasterChef Singapore’s history, three contestants fought it out in the finale instead of the traditional two, in an indication of the top calibre of this season’s home cooks. The final three contestants were tasked to whip up a three-course menu for judges Chefs Audra Morrice, Bjorn Shen and Damian D’Silva. As the rest of the Top 12 home cooks cheered them on, the finalists were graded scores out of 30 by each of the judges for each course. After the second course, Andi bowed out for bagging the lowest combined score, leaving Chew and Nares to go head-to-head in a dramatic dessert duel. By the end of the three-round battle, Chew triumphed with a grand total of 76.5 points out of 90, sealing victory over Nares by a mere 1.5 points! In their appraisal of Chew’s abilities, the three judges praised his polished plating and refined reimagining of humble home cooked fare, with finely finessed flavours befitting any top restaurant.

As champion, Chew, 23, will savour a sumptuous spread of prizes totalling over $100,000 worth of cash and items, including:

“I am so proud to be Singapore’s next MasterChef!” said the elated winner Johnathan Chew. “My confidence in my abilities has grown so much, and I have picked up so many skills throughout my MasterChef journey. This moment has always been a dream of mine, and clinching the trophy will motivate me to chase after all my other food dreams – like opening a bakery with my mum, which I feel is now within reach.”

Added Chew: “MasterChef Singapore was the first time I have interacted with so many fellow foodies, professional chefs and big names in the food industry. My perception of a career in food has changed completely. I now understand why a meal at a Michelin starred restaurant warrants a certain price. Food is not just about what you see on your plate or taste in your mouth. It's the chef’s effort, the attention to detail, the communication skills and teamwork with fellow staff and food suppliers. As Singapore's new MasterChef, I hope I will be able to emulate the qualities that these chefs embody, and make mouthwatering food for the people.”

“Season Three of MasterChef Singapore was a stirring showcase of the best things in life – food, friendships and love for family, forged through the fire of the kitchen,” said Angeline Poh, Chief Customer & Corporate Development Officer, Mediacorp. “Through the series, we were introduced to some of the most charismatic chefs and personalities, all united in their passion for upholding Singapore’s cherished culinary customs, while pushing the creative boundaries of local tastes and textures.”

Added Ms Poh: “Our heartiest congratulations to Johnathan on your MasterChef Singapore win! Your craft was on dazzling display tonight, and you are an inspiration to all aspiring amateur chefs. To Andi and Nares, you put up a formidable fight, and should be very proud of yourselves. This is only the beginning of a new chapter in your culinary careers for all of you! To our judges, sponsors, and partners, thank you for joining us in bringing such a spectacular season to our audiences.”

Season Three of MasterChef Singapore was an ode to Singapore’s unique multicultural cuisine and the nation’s collective fondness for food. Besides shining a spotlight on the robust richness of local makan and heritage, the 10-episode season also called attention to sustainability issues, such as the importance of reducing food waste and leveraging local produce to minimise carbon footprints. The casting call attracted applicants in the hundreds from all walks of life, with an eclectic ensemble of teachers, university students, investors, stay-at-home mothers, and a food delivery driver.

MasterChef, created by Franc Roddam, first launched in 1990 in the UK and was later revived in 2005, where it remains a number one hit for the BBC. In 2017, MasterChef was officially crowned the Most Successful Cookery Television Format by Guinness World Records. MasterChef celebrated its 500th series globally in 2021, with 49 productions in 33 territories airing last year. International ratings hit, drawing in audiences in major markets including the UK, US, Brazil, Australia, Italy and Spain, the MasterChef format and finished programmes are represented internationally by Banijay Rights. Motion Content Group, part of GroupM, a leading media management company, has acquired the rights to produce and broadcast MasterChef Singapore from Banijay Rights. Please refer to the Annex for information on Motion Content Group and Banijay Rights.

Fans who wish to relive the best moments or catch Season Three again on demand may do so on meWATCH or Mediacorp Entertainment YouTube Channel. The encore telecast of the final episode of MasterChef Singapore Season Three is also available on Channel 5 on Tuesday, 5 July at 8pm.

About Motion Content Group
Motion Content Group invests into entertainment content to support the commercial and editorial needs of over 200 network and platforms. It uses its global scale and relationships with the world’s leading talent, producers and distributors to gain access to the world’s best content for the benefit of our clients and media partners. Motion provides support and expertise to GroupM’s agencies and their clients to help realise and scale client entertainment ambitions. Headquartered in London and Los Angeles, Motion currently operates in 40 countries and has a broad range of award-winning programming distributed globally including LOVE ISLAND, on air in 21 markets, and Netflix’s hit social experiment THE CIRCLE. Motion is GroupM’s entertainment business, part of WPP.

About Banijay Rights
Leading independent global distributor, Banijay Rights, represents a world-class, multi-genre portfolio of over 130,000 hours of standout programming. Leading distribution for the largest international creator and producer, Banijay, the division handles the exploitation of some of the planet’s best scripted and non-scripted brands.

Representing quality, excellence and experience in the business of linear and non-linear television and ancillary activity across all platforms, Banijay Rights’ catalogue encompasses a host of top titles from Banijay’s 120+ in-house labels, and a number of third-party producers, spanning drama, comedy, entertainment, factual, reality, family, formats and theatrical.

About Mediacorp
Mediacorp is Singapore’s national media network and largest content creator. Its purpose is to create engaging and trusted content, as well as to connect communities and inspire people. Mediacorp engages over three million people in Singapore daily across four languages on its digital platforms including meWATCH, meLISTEN and CNA.asia, six TV channels and 11 radio stations. Beyond Singapore, Mediacorp also has a growing international audience through CNA and content distributed across markets.

With a focus on nurturing talent and growing the sector, the company is committed to investing in nation-wide initiatives like Star Search, Anugerah, Yaar Antha Star and SPOP, commissioning a wide variety of work from local content creators, and collaborating with institutes of higher learning. As Singapore’s first local Multi-Channel Network in partnership with YouTube, Mediacorp is also committed to developing a network of digital content creators.